More than 55 diseases have been linked to gluten, the protein found in wheat, rye, and barley. It’s estimated that 99% of the people who have either gluten intolerance or celiac disease are never diagnosed. It is also estimated that as much as 15% of the US population is gluten intolerant. Could you be one of them?

If you have any of the following symptoms it could be a sign that you have gluten intolerance:

1. Digestive issues such as gas, bloating, diarrhea, and even constipation. I see constipation particularly in children after eating gluten.

2.Keratosis Pilaris, (also known as “chicken skin” on the back of your arms). This tends to be a result of a fatty acid deficiency and vitamin A deficiency secondary to fat-malabsorption caused by gluten damaging the gut.

3. Fatigue, brain fog, or feeling tired after eating a meal that contains gluten.

5. Neurologic symptoms such as dizziness or feeling of being off-balance.

6. Hormone imbalances such as PMS, PCOS, or unexplained infertility.

8. Diagnosis of chronic fatigue or fibromyalgia. These diagnoses simply indicate your conventional doctor cannot pinpoint the cause of your fatigue or pain.

9. Inflammation, swelling, or pain in your joints such as fingers, knees, or hips.

10. Mood issues such as anxiety, depression, mood swings and ADD.

How to test for gluten intolerance?
I have found the single best ways to determine if you have an issue with gluten is to do an elimination diet and take it out of your diet for at least 2 to 3 weeks and then reintroduce it. Please note that gluten is a very large protein and it can take months and even years to clear from your system so the longer you can eliminate it from your diet before reintroducing it, the better. 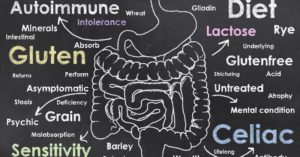 e best advice that I share with my patients is that if they feel significantly better off of gluten or feel worse when they reintroduce it, then gluten is likely a problem for them. In order to get accurate results from this testing method you must eliminate 100% of the gluten from your diet.

How to treat gluten intolerance?
Eliminating gluten 100% from your diet means 100%. Even trace amounts of gluten from cross-contamination or medications or supplements can be enough to cause an immune reaction in your body.

The 80/20 rule or we don’t eat it in our house, just when we eat out? is a
complete misconception. An article published in 2001 states that for those with celiac disease or gluten sensitivity eating gluten just once a month increased the relative risk of death by 600%.